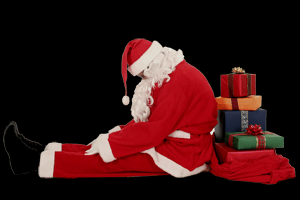 It’s that time of the year, Santa has to get back to work, but this time, he doesn’t want to. Mrs.Claus has left him for the Tooth Fairy, children no longer give him milk with cookies, and Rudolph no longer has a red nose to guide his sleigh.

Santa Claus has been looking for a way out of giving presents, he even thought of blaming the Grinch for stealing them all so he didn’t have to, except the Grinch no longer wants to steal Christmas. Feeling sorry for himself, Mr.Claus drowns his sorrows in a mixture of cookies, alcohol, and warm milk every night hoping for December to pass, he even stopped keeping track of the naughty and nice list.

The elves, becoming upset with Santa for not doing his job, walk out on him for the first time in history. Needless to say, Santa was depressed. At this point Santa has no will to live, he decides to go on top of a tall building and jump, but when he tries, Dasher comes and catches him with the sleigh. Eventually Santa gives up, and sits on top of the building thinking about all the children on the Polar Express headed to see him.

Finally, realizing the importance of Christmas to many children around the world, Santa decided to do his job. He went on to continue serving the good little boys and girls of the world, giving them hope they never dreamed of. The elves came back and Rudolph gained his light, and away they all flew, saying Merry Christmas to all, and to all a good night.

The Rights of the LGBT+ Community In the United States of...