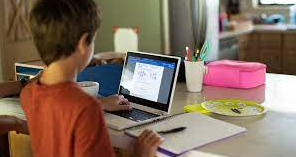 Before the beginning of the school year, I had been working a job. On the way to work one day my mom had said to me that there is a virtual option for school this year and she signed me up for it. I was cool about it because it sounded like a good idea since I didn’t have to get ready and dressed for school. When the first day online started it was very easy, I said “if this is how it’s gonna be all year, then I’ll be good,” I was wrong.

The first thing that went wrong was that I had three missing classes, and it took about one and a half months to get them. I didn’t mind it though, but that probably would have messed up my credits. The next thing that went wrong was my sleep schedule. I thought I could just sleep through classes and get the work done, but that turned into me sleeping past classes and not waking up. Teachers would always yell my name while I was sleeping. I just pretended my Chromebook was broken. Also, some of the teachers were just not meant to teach online, my math teacher had a very bad English accent and I couldn’t understand a word she said, she would always yell at everyone because we didn’t know what was going on.

Over time online school got repetitive and it was tiring to me. I started to miss school and the good times I had there, so I had my mom sign me back up. It was a great decision for me because it was something I was able to keep up with and not always be physically and mentally tired. Unlike virtual, I never had a problem with in person school.